The Majority of Your Body is Made of Water

Without water, life would not exist. Water, composed of oxygen and hydrogen, is the most important and most abundant molecule in the human body and makes up about 50-70% of the total body weight. Classified as a macronutrient, water serves a myriad of vital functions, including but not limited to the transportation of nutrients and waste products, aiding various chemical reactions, helps regulate body temperature, and water is the ultimate solvent and lubricant for all living matter. The average 70 kg man has about 42 liters of water inside his body. Consider this, the density of water is 1 gram/cubic centimeter. The average density of the human body is roughly 1.096 gram/cubic centimeter, depending on the method for measuring body composition (i.e., hydrostatic weighing, skinfold measurements, etc.) and various anthropometrics (i.e., body fatness, lean muscle mass, etc.) (Heymsfield, 1989).

Lack of water can result in serious consequences. Losing as little as 2% of an individual's body weight in water can lead to complications, which may include:
In response to dehydration, the brain releases antidiuretic hormone (ADH), which in turn decreases urine production. ADH is released upon receiving the signal of low blood volume, which stimulates an increase in blood pressure and the kidneys to retain electrolytes, through a series of hormonal reactions. This negative feedback loop  increases blood volume, thus helps conserve water (McGuire, Beerman, & William, 2011).

The Institute of Medicine suggests that women should consume about 90 ounces (2.7 liters or 11 cups) of water daily, and that men should consume 125 ounces (3.7 liters or 16 cups) daily. These amounts include water from all beverages and foods consumed. A small amount of water (300-400 mL/day) is generated from metabolic processes (McGuire, Beerman, & William, 2011). When engaged in physical activity, especially in warm environments, your need for water increases. Very active people living or working in warm environments may have daily water requirements of up to about 240 ounces (7 liters, or 30 cups). 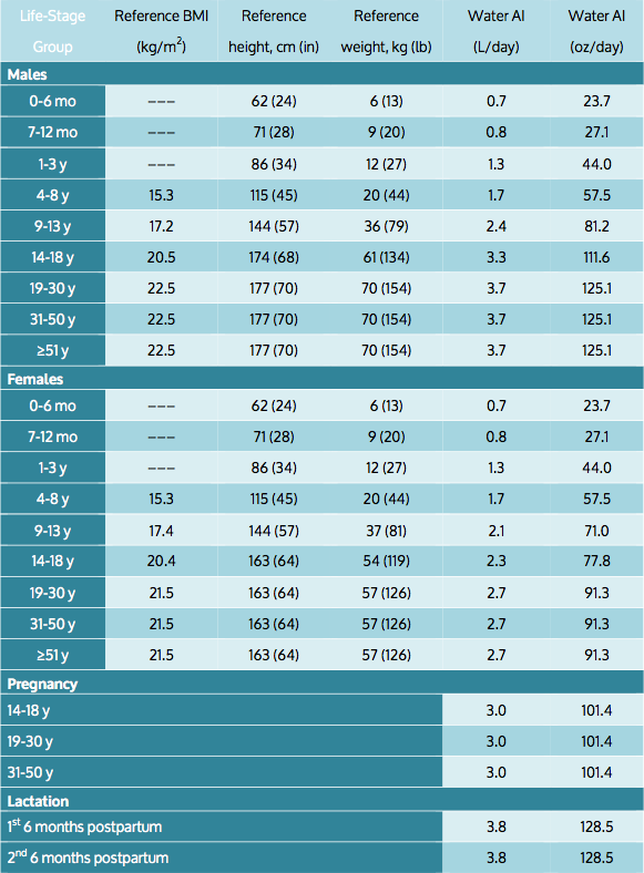 Researchers continue to confirm what has long been known, that fluoride is a neurotoxin. Fluoride is classified in the same category as arsenic, lead and mercury. Neurotoxins diminish quality of life, reduce academic achievement, and disturb behavior, with profound consequences for the welfare and productivity of entire societies. Children who are exposed to fluoride in drinking water have an seven point average reduction of IQ. Another study found that children, whose mothers were exposed to fluoride during pregnancy, displayed behavioral deficits (increased risks for hyperactivity and aggressive behavior) at 2 years of age (Grandjean & Landrigan, 2014). Fluoride in drinking water has also been linked to various cancers including osteosarcoma (bone cancer) among young males (Bassin, Wypij, Davis, & Mittleman, 2006), bladder and lung cancer (Grandjean, 2004). Several research teams in India and China have reported an increased incidence of mutagenic (an agent that causes genetic mutation) effects in fluoride-exposed humans (Sheth 1994; Meng 1995, 1997; Wu 1995; Joseph 2000). One study even found that primate cells (great apes and humans) are more sensitive to fluoride’s genotoxic effects than rodents (Kishi, 1993). Fluoride is also classified as a endocrine disruptor, which can damage the bones, the brain, the thyroid gland, the pineal gland and blood sugar levels (Committee on Fluoride in Drinking Water, Board on Environmental Studies and Toxicology, & Division on Earth and Life Studies, 2006).
For more information on fluoridated water, click the button below to be redirected to the water fluoridation page.
Find out what is In your local tap water
Learn more about Water Fluoridation

Bottled water is often just tap water that is marked up in price and packaged, although it does not go through any other series of tests. Bottled water is regulated by the FDA, not the EPA. However, bottled water isn’t just tap water, but it also contains plastic that leaches into the bottle, which of course gets into the body. Plastic water bottles are made out of chemicals like BPA and phthalates, which are known hormone disruptors. These hormone disruptors wreck havoc within the endocrine system. The metabolites of these phthalates can be measured in quantifiable amounts within the body. After drinking bottled water (or exposure to chemicals) day, after day, after day, after day, the body burden begins to rise. Body burden is amount of burden your body takes as a result of accumulated toxins from the environment, food, air and water. This effect of accumulation is then combined with all the other toxins in the environment (e.g., personal care products, pesticides, EMFs, heavy metals, drugs, pharmaceuticals, etc.) that one is exposed to in a given day. All these toxins begin to build up and accumulate, and the body absorbing all of them. Very few of these toxins have been tested individually for theirs effect of health. But they certainly they have never been tested in combination with each other. Below are some terms used when shopping for bottled water:

Reverse Osmosis (RO): the process that occurs when back pressure is sufficient to reverse the normal direction of osmosis through membranes; a water treatment process that removes contaminants from water by using pressure to force water molecules through a semipermeable membrane.

Osmosis, a mode of passive transport (does not require energy), being the movement of water molecules across a selectively permeable membrane (Urone, Hinrichs, Dirks, & Sharma, 2016). Essentially, reverse osmosis forces water through a membrane, just larger enough for water molecules to pass, that will not pass any pollutants or other precipitates [salt, chlorine, nitrates, pesticides, fluoride, bacteria, pharmaceuticals, heavy metals (arsenic, lead, etc.)]. Water that has been filtered using a reverse osmosis filter is some of the purest water available to purchase. Check your local area for water suppliers that sell reverse osmosis water. Considering that the body is 50-70% composed of water, buying the cleanest water available is a great investment for your long-term health. In the video below, like Dr. Mercola says, "any filter is better than no filter, otherwise your body becomes the filter."

Committee on Fluoride in Drinking Water, Board on Environmental Studies and Toxicology, & Division on Earth and Life Studies (2006). Fluoride in drinking water: A scientific review of EPA’s standards. Washington, D.C.: National Academies Press.

Meng Z, Zhang B. (1997). Chromosomal aberrations and micronuclei in lymphocytes of workers at a phosphate fertilizer factory. Mutation Research 393: 283-288.