Drug: a chemical that is used to treat or prevent a disease

Public health officials claim that water fluoridation exists to prevent dental decay among the masses. Fluoride happens to be the only drug that is forced on the public without their consent, and without proper knowledge of the possible side effects of consuming excess fluoride. The public is misled that ingesting fluoride helps prevent tooth tooth decay. It is one claim to state that topical fluoride may aid in the prevention of cavities, however, drinking water that is fluoridated to become absorbed, distributed and metabolized by the entire body as it enters the gastrointestinal system is a very different claim. The "crisis" of dental decay is the result, largely, of sugar abuse, especially prevalent in refined, processed foods. A large concern regarding the consumption of fluoridated water, among many, is the fact that the dose of the drug can not be controlled, regardless of age, bodyweight or sex. A growing body of evidence suggests that the various fluoride compounds, added to water supplies, toothpaste, pharmaceutical drugs, foods and packaging are not safe for human consumption.

Source: CDC. (1999, October 22). Achievements in public health, 1900-1999: Fluoridation of drinking water to prevent dental Caries. Retrieved February 21, 2017, from https://www.cdc.gov/Mmwr/preview/mmwrhtml/mm4841a1.htm
Fluoride Affects Many Tissues in the Body Besides the Teeth
Renowned toxicologist, Dr. John Doull, who chaired the National Academy of Science’s review on fluoride in 2006, and Doull’s committee at the NAS published an 500-page review of fluoride’s toxicity. The report concludes that fluoride is an endocrine disruptor and can affect many tissues in the body, including the bones, the brain, the thyroid gland, the pineal gland, and even blood sugar levels. The researchers implore public health officials to investigate if current fluoride exposures in the United States are contributing to chronic health problems, like bone disorders, thyroid disease, low intelligence, dementia, and diabetes, particularly in people who are most vulnerable to fluoride’s effects. These recommendations highlight that—despite 60 years of fluoridation—many of the basic studies necessary for determining the program’s safety have yet to be conducted. 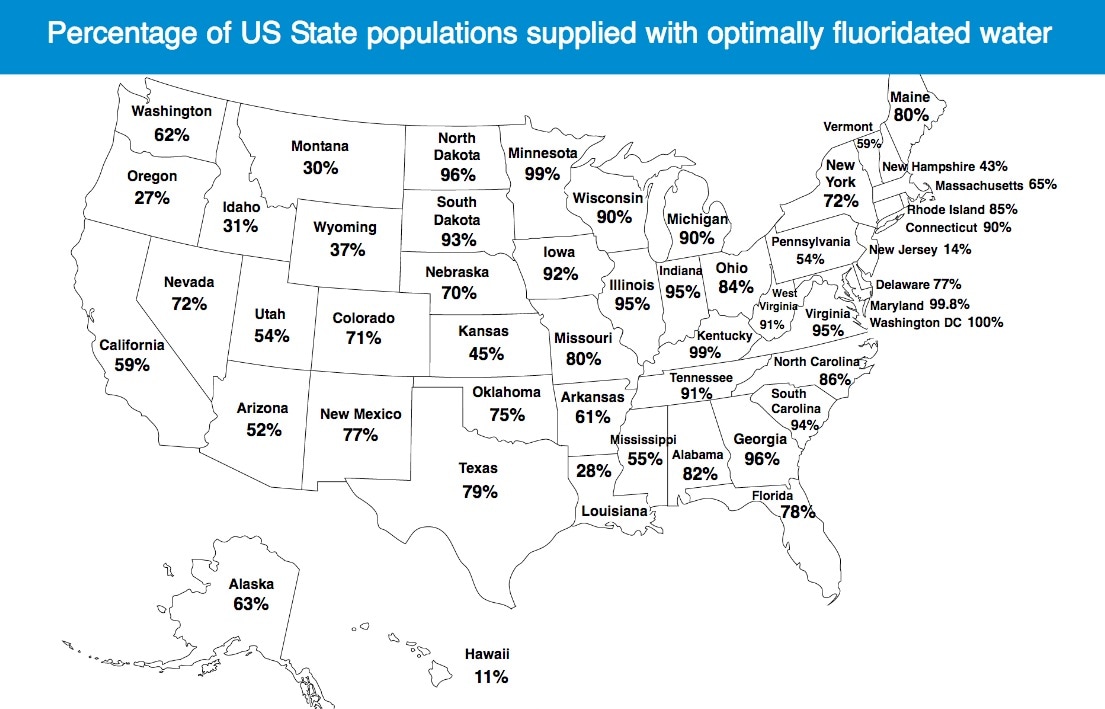 Image by "One in a Million: the facts about water fluoridation"

Most fluoride additives used in the United States are produced from the phosphate fertilizer industry (CDC, 2014). Fluorosilicic acid is derived directly from the smokestacks during the production of phosphate fertilizer, shipped to water treatment plants and then introduced into the public water supply. This industrial grade fluoride is contaminated with trace amounts of heavy metals such as lead, arsenic and radium.

Researchers continue to confirm that fluoride is a neurotoxin. Fluoride is classified in the same category as arsenic, lead and mercury. Neurotoxins diminish quality of life, reduce academic achievement, and disturb behavior, with profound consequences for the welfare and productivity of entire societies. Children who are exposed to fluoride in drinking water have an seven point average reduction of IQ. Another study found that children, whose mothers were exposed to fluoride during pregnancy, displayed behavioral deficits (increased risks for hyperactivity and aggressive behavior) at 2 years of age (Grandjean & Landrigan, 2014). Fluoride in drinking water has also been linked to various cancers including osteosarcoma (bone cancer) among young males (Bassin, Wypij, Davis, & Mittleman, 2006), bladder and lung cancer (Grandjean, 2004). Several research teams in India and China have reported an increased incidence of mutagenic (an agent that causes genetic mutation) effects in fluoride-exposed humans (Sheth 1994; Meng 1995, 1997; Wu 1995; Joseph 2000). One study even found that primate cells (great apes and humans) are more sensitive to fluoride’s genotoxic effects than rodents (Kishi, 1993). Fluoride is also classified as a endocrine disruptor, which can damage the bones, the brain, the thyroid gland, the pineal gland and blood sugar levels (Committee on Fluoride in Drinking Water, Board on Environmental Studies and Toxicology, & Division on Earth and Life Studies, 2006).

Recent research conducted on animals suggests that fluoride may decrease bone strength by altering the microarchitechture, thus increasing the risk of fracture (Doull et al., 2006). Fluoride has been shown to accumulate in tissues within the human body, including bone (Doull et al., 2006) and the pineal gland (Luke, 1997). The current adequate intake (AI) for fluoride is 3 mg/day for adult females and 4 mg/day for adult males (Ross, Taylor, Yaktine, & Del Valle, 2011). Most foods have concentrations of fluoride well below 0.05 mg/100 g, except fluoridated water (Young et al., 1997). Keep in mind, the chemicals used to fluoridate water (fluorosilic acid, sodium flurosilicate, sodium fluoride) are not naturally occurring (“NSF Fact Sheet on Fluoridation,” 2013).

Since bone is the principal site of fluoride accumulation, particularly during the growth spurts of childhood, the connection between fluoride and osteosarcoma is biologically plausible for the following reasons:
Researchers conducting an age-specific analysis of a national case-control study found a significant association between males that consumed fluoridated water during their mid-childhood, 6th, 7th, and 8th years of life, and the  risk of developing osteosarcoma during their teenage years (Bassin, 2001).
Fluoride in Drinking Water: A Scientific Review of EPA's Standards (2006)
Summary of The National Research Council (2006) Findings 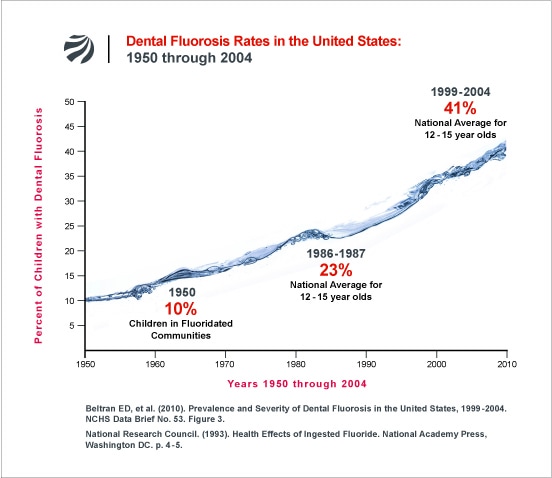 The Solution: Use a Filter, or Your Body Becomes a Filter

Bassin, E. B. (2001, April ). Association Between Fluoride in Drinking Water During Growth and Development and the Incidence of Osteosarcoma for Children and Adolescents. Retrieved February 21, 2017, from http://www.fluoridealert.org/wp-content/uploads/bassin-2001.pdf

Committee on Fluoride in Drinking Water, Board on Environmental Studies and Toxicology, & Division on Earth and Life Studies (2006). Fluoride in drinking water: A scientific review of EPA’s standards. Washington, D.C.: National Academies Press.