Creatine, appropriately named after the greek word (kreas) for meat, was first isolated from the meat of mammals in 1832 by Michael Eugene Chevreul (The Editors of Encyclopædia Britannica, 2009). In 1847 creatine was later confirmed by Justus von LieBig to be a naturally occurring compound that could be found in the flesh of mammals, which was about ten times more prevalent in wild animals compared to captive animals. Liebig determined that increased physical activity was linked to increased creatine content (Bahrke, M. S., & Yesalis, C. E., 2002).

While there are many different types of synthetically produced creatine, the most commonly used and studied is creatine monohydrate. Besides naturally occurring creatine found in meat and fish, creatine comes in various forms, most commonly in powder, but is also available in pill or liquid form.

Creatine monohydrate is relatively inexpensive to purchase, but ranges from $4.78 (120 grams of powder) to $89.99 (120 count of capsules). Creatine monohydrate can be purchased online (via websites such as bodybuilding.com, gnc.com, etc.), in store (such as The Vitamin Shoppe, Walmart, etc.), even at many gyms (24 Hour Fitness, LA Fitness, etc.). Creatine supplementation is not prohibited or banned by the National Collegiate Athletic Association or the International Olympic Committee. Creatine use by athletes is considered a legal supplement and has been seen as safe at recommended doses.

Creatine is used within the body in the form of phosphocreatine (PC) during short bouts of exercise (5-10 seconds) in order to fuel the need for quick, high-intensity, powerful movements. The energy is supplied when there is a donation of the phosphate group and its high energy bond from PC to adenosine diphosphate (ADP) to form adenosine triphosphate (ATP). This reaction is catalyzed by the enzyme creatine kinase (as seen in the figure below). ATP is broken down to ADP and inorganic phosphate, at the onset of exercise, then ATP is resynthesized via the PC reaction in the opposite direction. This system, ATP-PC or phosphagen system, provides a simple one-enzyme reaction to produce ATP for activities such as olympic weight-lifting, high jumping, or a football player sprinting down field. The largest disadvantage to this energy system is the limited supply of creatine phosphate. Increasing the pool of creatine phosphate within the muscle is similar in concept to increasing the size of a gas tank in a race car; increasing the size of a gas tank in a race car won't make it go faster but it will allow it to maintain its top speed for a longer duration. This is the same for our muscles, when you increase the creatine content inside the muscle you can prolong your high intensity workouts longer (Dunford & Doyle, 2011).

Though having a low solubility in water, creatine is thought to have a high bioavailability. Creatine supplementation appears to increase body mass but this is probably due more to intracellular water retention (which may stimulate muscle glycogen storage) rather than an increase in protein synthesis (Powers & Howley, 2014). Slight body weight changes are mostly from increased intramuscular water volume; water retention being a common side effect seen in the early stages of supplementation. More research needs to be conducted on water retention and increased work load on the kidneys (Kozlowski et al., n.d.).

Image by Boghog2 on Wikimedia Commons

The total creatine concentration within skeletal muscle is about 120 mmol ∙kg-1, and about 2 grams are excreted each day. These two grams are replaced by diet (1 gram) and by synthesis (1 gram) from amino acids (Powers & Howley, 2014).

Supplementing creatine can increase muscle creatine levels by approximately 20 percent. Creatine supplementation consists of a loading phase (20-25 g/day, for 5-6 days) and/or supplementing smaller amounts of creatine over a longer period of time (3-10 g/day, 1 month). In theory, supplementation and loading of creatine allows the muscle to maintain its ability to resynthesize ATP at a more consistent rate, allowing an athlete to train harder, potentially increasing strength, speed and power (Dunford & Doyle, 2011). However, the loading phase has been shown to have inconsistent results (Zuniga et al., 2011).

Supplementing with creatine doesn't necessarily mean its going to work for you if you already have a high amount of creatine in your skeletal muscles. Some people respond quite differently than others, so supplementation may or may not be for you. Subjects with high levels of creatine may not respond to an increase in muscle creatine levels (Powers & Howley, 2014). The maximum benefits of creatine can be seen in novice bodybuilders or athletes who do not have high amounts of creatine in their muscles. 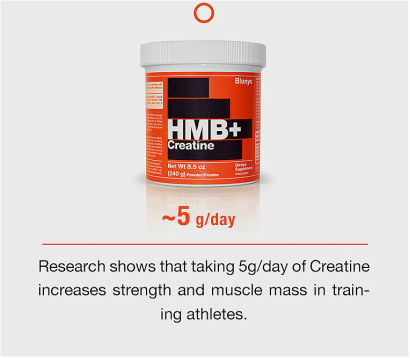