If your goal is to permanently lose weight, you're not alone. Indeed, the incidence of obesity is on the rise throughout the world, making it one of the fastest developing public health concerns. The World Health Organization (WHO) has described obesity, or "globesity", as a worldwide epidemic. It is estimated that more than 300 million people worldwide are obese (WHO, 2018). Obesity is particularly prevalent in the United States, where over one third of the adult population is obese, and one in seven children and adolescents are obese. An incredible 60% of the American population is overweight.

If you find yourself being included in the demographic mentioned above, you have probably tried some sort of diet - most likely a calorie-restricting plan. Unfortunately, believing you can shed or maintain your weight by counting calories may be leading you astray and keeping you from success. Why, then, is obesity becoming an epidemic? Some would argue that people have no self-control and simply eat to much. This is unlikely. It is not how much you eat, it is what and when you eat, that determines whether or not you will meet your nutritional goals.

Calories In Does Not Equal Calories Out

According to the "Calories In, Calories Out" myth, in order to lose weight all you need to do is follow the formula and "eat less, move more." But this simply isn't true.

Zoe Harcombe's book, "The Obesity Epidemic", is one of the most comprehensive documents ever compiled that exposes the flaws of this myth.

Influence of Calorie-Restricted Diets on the Body

Calorie-restricted diets do not work in the long run because they disrupt important hormonal and enzymatic signaling. Skipping just one meal, or eating too many carbohydrates for your personal diet type, can result in changes that make it more difficult for the body to lose fat. Initially, the response to a skipped meal is an elevation of stress hormones.
Learn more about stress
The body then responds to the stress signal by releasing stored glycogen from the liver into the blood to raise your blood sugar. After all, your body thinks you are in a life-threatening situation. Repeated bouts of stress result in a oscillation between high and low blood sugar levels, creating yet another major stressor on the body.  An over-stressed body will not function at an optimal level. For many, this is not the ideal state for losing weight.

If you eat too many carbohydrates, your body must release insulin to lower blood-sugar levels. Skipping meals or not eating enough of the right foods also keeps insulin levels high because the body thinks you are in a state of famine, and it is forced to store energy whenever it is supplied. If you are active, insulin will store sugar in the muscles. But if your muscles are not being used, or if the muscle cells are full, your extra calories will wind up in adipose tissue. Exercising muscles keeps them sensitive to insulin, since an active muscle wants to take in sugar for energy. Inactive muscles become insulin resistant and shuttle more and more calories to fat cells. A diet calling for a high consumption of carbohydrates beyond ideal for your personal diet type will also make you progressively insulin resistant.

Accumulating fat in the middle of your body is an indication that you have become insulin resistant. The medical name for this is Syndrome-X. Again, accumulating unwanted fat around your midsection and Syndrome-X are usually the result of dieting, oscillation dieting, consuming too many carbohydrates for your personal diet type and lack of exercise. Once the adipose tissue in your midsection is full, the fat accumulation extends to other areas of the body and you become progressively more obese. Because muscle and fat cells become progressively less sensitive to insulin, blood sugar levels rise higher, forcing the pancreas to overwork in an attempt to lower blood sugar levels. Eventually, at this rate, you will become diagnosed with type-2 diabetes.

Anytime you miss a meal - yes, just one meal - your body increases the release of lipogenic (fat-storing) enzymes. When these lipogenic enzymes increase, the enzymes you desire, the lipolytic (fat-burning) enzymes, are decreased (Waterhouse, 2012). This effect is much more pronounced in women than in men. 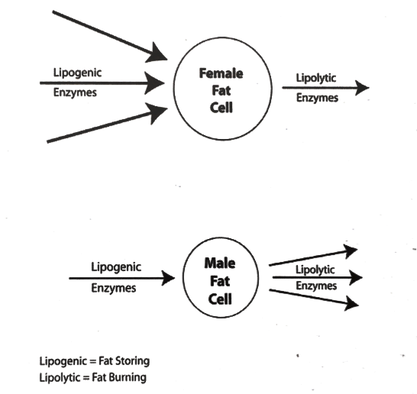 Fat-storing and fat-burning hormones. Image from (Waterhouse, 2012).
The entire process of dieting, constantly being in a fight-or-flight state with elevated sympathetic nervous system (SNS) activity, and eating incorrectly will leave your tired. Given the success rate of cultural conditioning emanated from junk food manufacturers and the media, most people do not understand that they are gaining weight becuase they are eating incorrectly, not because they are eating too much. Improper eating habits always result in the inability to replace the vital nutrients that keep body systems running correctly and provide additional energy to spend living, not just surviving. Inevitably, people use tea, coffee, soda, sugar, and other pick-me-ups to compensate for the energy deficit. Any such stimulant only activates the SNS, releases more stress hormones and eventually requires more and more of the stimulant to receive the desired effect. After a while, adrenal glands become exhausted, resulting in a number of undesirable symptoms, all of which are part of the chronic fatigue symptom profile.

If you have lost weight on a diet, you more than likely lost significant amounts of muscle. Remember, muscles burn energy. If you decrease muscle mass, your metabolic rate will lower, therefore you won't burn as much energy. This increases your chances of gaining the weight you lose. Then the oscillation diet syndrome begins, which is even more stressful than a one-time diet. Each time you start and stop a diet, you significantly increase the difficulty of restoring your physiology to normal.

In our modern age, there a wide variety of methods to count calories. Many will use these methods to decide how much dessert to consume. However, this logic is flawed.

When attempting to determine how many calories to consume each day, also known as Total (daily) Energy Expenditure (TEE), many fail to calculate how many calories are required to maintain homeostasis. TEE has three main components: (1) basal metabolism, (2) physical activity, and (3) thermic effect of food.

A walloping 50-70% of all the calories consumed are used to maintain basal metabolism, which is the energy (kcal) expended to sustain basic, involuntary life functions such as respiration, beating of the heart, nerve function, and muscle tone. Another 5-15% of your caloric intake is required for digestion and elimination. The remaining 15-30% of energy that must be considered is dependent on your physical activity. You also need to consider how your body functions - this is sometimes referred to as the X-Factor. The X-Factor is a variable that can either increase or decrease daily TEE based on several genetic, hormonal and environmental factors. This includes adaptive thermogenesis and nonexercise activity thermogenesis. Adaptive thermogenesis is a temporary change in energy expenditure that enables the body to adapt to such things as changes in the environment or to physiological conditions such as trauma, starvation, or stress. Shivering in response to cold is an example of adaptive thermogenesis. NEAT is energy expended for spontaneous movements such as fidgeting and maintaining posture. The contributions of adaptive thermogenesis and NEAT to TEE have yet to be determined, but they are likely small. 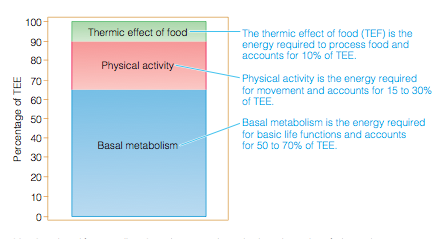 Adapted from: Lowell BB, Spiegelman. Towards a molecular understanding of adaptive thermogenesis. Nature. 2000;404:652–60.