Genetic Engineering: ("recombinant DNA technology", "gene-splicing", "GMO") the deliberate modification of the characteristics of an organism by manipulating its genetic material.

Many biotechnology proponents will argue that gene-splicing is as natural as traditional breeding through the means of sexual reproduction. However, recombinant DNA technology combines genes, or reprograms the software of life, in a radically different way. Reviewing the basics of genetics may clear confusion from this huge misunderstanding.

Every gene has multiple alternative versions of itself, which is called an allele. Different alleles give rise to different traits. For example, the gene that determines the shape of a snap pea has one allele to make them look smooth and another that gives them the appearance of wrinkles. During the domestication of a species (a cyclic, generational process), several alleles that exist in the wild are gradually replaced by other alleles, giving rise to new characteristics. Although, as alleles swap sites, chunks of unwanted alleles may "hitch-hike" along as the originals are replaced, rather than a single allele swapping out an individual site. Features of the plant that were designed to exist in the wild are typically traded out for other commercial reasons. Consequently, many traditionally bred organisms have lost their natural competitiveness. For example, due to domestication of corn, the seed coats have become so thin, which makes easy for eating, but provides little protection; therefore diminishing the competitive edge of corn. In contrast, genetic engineers splice new genes while maintaining others. The recombinant technology does not "trade out" genes, as seen in traditional breeding, which is impossible to do outside of genetic engineering.

An Unscientific, Irresponsible, and Wrong Move by the FDA

You may be surprised to hear that the FDA (Food and Drug Administration) has refused to regulate genetically engineering (GE) foods, rather this agency has promoted them as safe natural foods. The FDA has allowed GE foods to marketed not only without testing but without labeling such foods to inform consumers about the reconfiguration of genetic material. This approval created an illusion that all GMOs considered safe, rather than conducting extensive risk assessments on every genetically engineered product. The initial environmental release of GMOs proceeded without oversight, regulations or restrictions from the government.

GE foods are produced through the discipline of molecular biology. During the 1930's, molecular biology was developed as a distinct discipline largely through the efforts of the Rockefeller Foundation, with the help of Max Mason and Warren Weaver. From the very inception of GE technology, the agenda for the engineering of life was clouded by the positive possibilities and did not account or plan for risks and negative developments.

Bioengineering pioneers displayed unrealistic confidence in their ability to manage adverse outcomes. Nature is more subtle at the microscopic level and level of the ecosystems, than molecular biologists would like to believe. Molecular biologists look at nature through the lens of their own discipline. After reviewing graduate degree curriculum of microbial engineering programs, it appeared that course work largely consists of chemistry, biochemistry, molecular genetics and some physiology. To fully understand the complex dynamics of genetic engineering, aspiring bioengineering students should be required to study ecology, biological adaptation and population genetics, among other courses. This gap in education allows the microscopic world to be viewed in isolated biochemical pathways, rather than understand how new organisms would function wholly in the environment. Accounting for how GE foods would impact and interact within the ecosystems was largely neglected; those who created created new forms of microbial life designed to live outside of a laboratory cannot fully understand hat the microbes will ultimately do.

The potential for creating problematic genes that are able to transfer to other organisms, which could become agents for new diseases is a frightening and possible scenario. However, through politics rather than biology, early molecular biologists were able to successfully convince the public that such an epidemic would not occur.

"...in holding scientific research and discovery in respect, as we should,
we must be alert to the equal and opposite danger that public policy
could itself become the captive of a scientific-technological elite."
- Dwight D. Eisenhower

The Force of Phantom Evidence

In the search for evidence to demonstrate that GE organisms are safe, the focus of molecular biologists was systematically narrowed to research only one type of bacteria called E. coli K-12, because it posed virtually no threat.

E. coli is a species of bacteria that inhabits the intestines of humans and other animals. E. coli K-12 is a specific strain solely developed in laboratories, which has become fairly weak compared to other strains of bacteria. K-12 would not stand a chance in competitive environments, where other microbes are constantly evolving to keep their "cutting edge". Consequently, molecular biologists felt confident that regardless of what new organism that was implanted with E. coli K-12, there was a limited chance it could escape the lab, let alone cause an epidemic. This approach drove public relations along with pro-GE scientists to yield favorable research results, concluding that all recombinant research was "perfectly safe".

However, diving beneath their peachy representations to observe the actual data, it is evident not all of the aspects of the E. coli-based research were problem-free. For example, in order to work with the genes of E. coli, the DNA must be cleaved, a process which substantially increases it's ability to promote tumors. Some biologists warned that splicing viral genes could expand the virus' infective range. But none of these findings were made aware to the public not congress, during the deregulation of genetic engineering.

The History of Monsanto

The Most Common Genetically Engineered Organisms 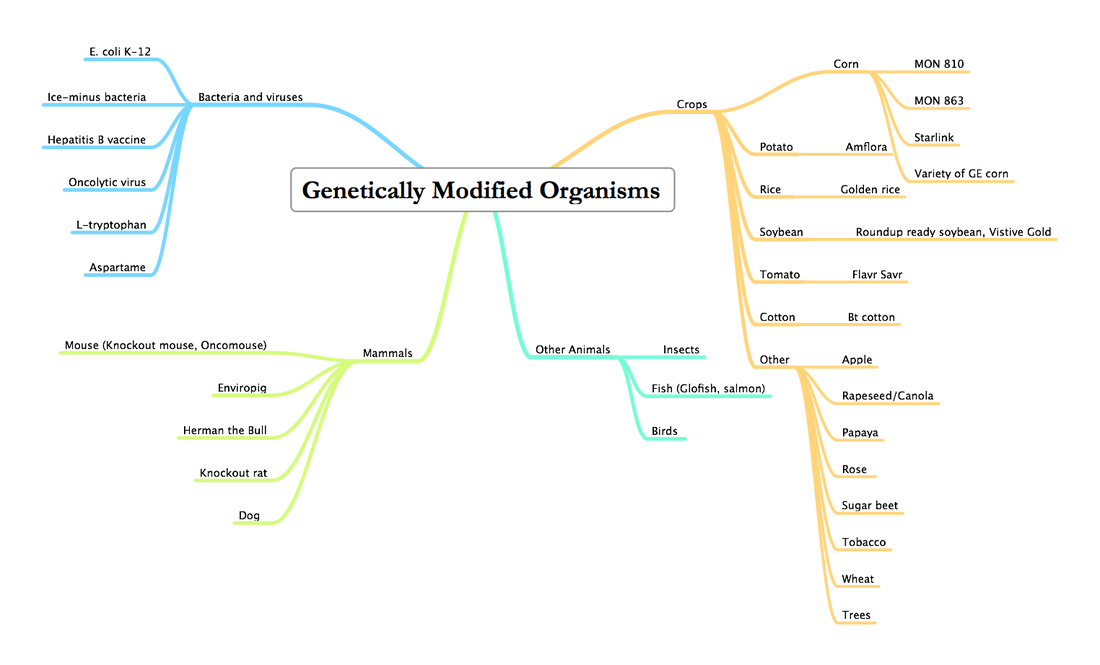 Plausible Link Between GE and Morbidity

Predicting the dynamics interactions and behaviors of a new type of organism in nature is next to impossible, as cross-species manipulation using biotechnology carries unexpected risks. Genetic engineering has the inherent potential to disrupt the normal processes within a living cell and create unintended and unusual side effects that can give rise to deleterious substances.

"The right to search for truth implies also a duty;
one must not conceal any part of what one has recognized to be true."
-Albert Einstein

Kay, Lily, The Molecular Vision of Life: Caltech, The Rockefeller Foundation, and the Rise of the New Biology (New York: Oxford University Press, 1993); Pnina Abir-Am, "The biotheorectical gathering, transdisciplinary authority and the incipient legitimization of molecular biology in the 1930s: new prospectives on the historical sociology of science," Hist Sci 25 (1987): 1-70.