Geoengineering involves carbon dioxide removal (CDR) and Solar Radiation Management (SRM), also known as Stratospheric Aerosol Injection (SAI) or "Chemtrails". SRM is a form of climate modification that claims to reduce the amount of sun that hits the earth’s surface. 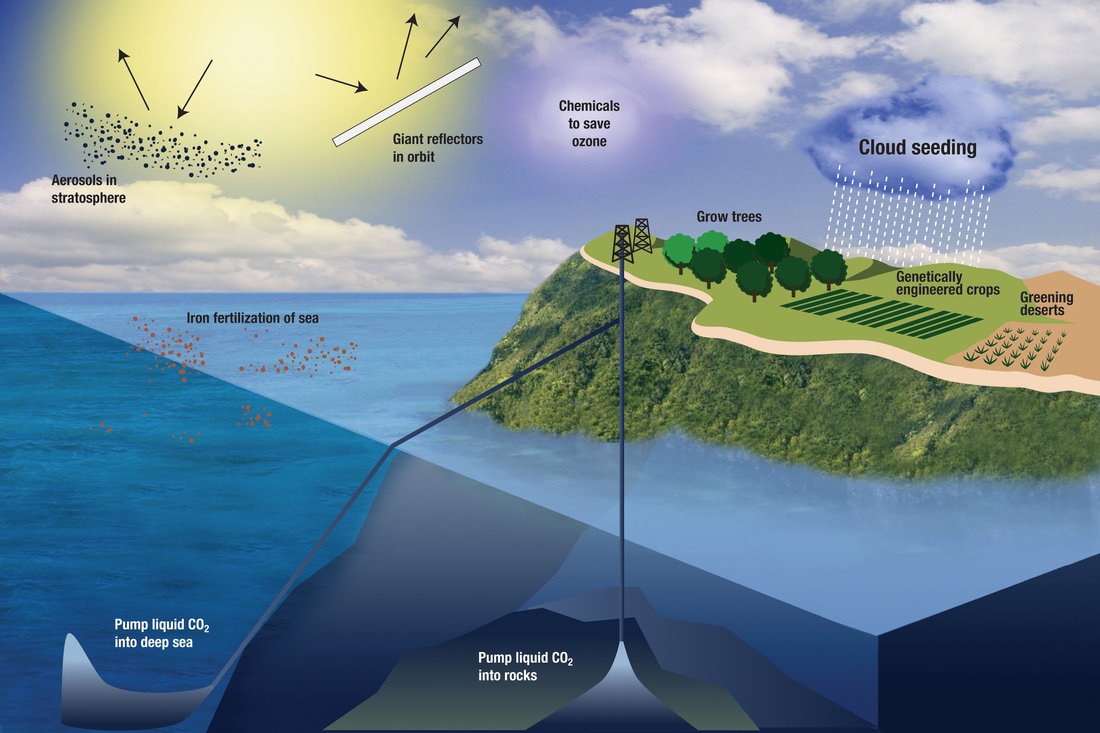 Geoengineering diagram. Image by University of Notre Dame.
A number of government agencies have been developing plans for research and ultimately operational programs in weather and climate modification. Here is a report from 1966, in which various agencies expressed interest in the ability to modify the weather. In 2015, the National Academy of Sciences conducted a 21-month geoengineering study, which happened be funded by the "U.S Intelligence community", also known as the Central Intelligence Agency (National Academy of Sciences, 2015). Below is a video of John Brennan, former CIA director from March 2013 to January 2017, speaking about SRM at the Council on Foreign Relations.

Ability to Control the Weather

Don't think it's possible? Here's a clip from 2013 from "CBS This Morning" in which contributor Michio Kaku, a physics professor at City College of New York, talks to Charlie Rose and Norah O'Donnell about the potential future of weather citing the use of lasers to manipulate rain.

Climate Models for the Layman

The premise that climate change is the result of man-made interventions, has been a widely debated topic is the recent generation. The hypothesis that the climate is warming, is solely based on the climate models that statisticians used to predict the future. With all statistics predicting the future, there is some error. The video below, Dr. Judith Curry, a renowned climatologist, explains the complex interactions that exist within the environment. She discusses how the data used to predict climate change may be skewed.

What is the Global Average Temperature?

The average global temperature is...impossible to measure and harder to calculate than you might think. While GISS and RSS and UAH and GHCN might be a confusing jumble of letters to most people, there are people pushing for global taxes, global courts and individual carbon budgets based on these data sets. So let's roll up our sleeves and take a look at the concept of "average global temperature."