“If you want to find the secrets of the universe,
think in terms of energy, frequency and vibration.”
- Nikola Tesla

What is PHysics?
Physics is the use of the scientific method to find out the basic principles governing light and matter, and to discover the implications of those laws.

Many physical phenomena are not themselves light or matter, but are properties of light or matter or interactions between light and matter. For instance, motion is a property of all light and some matter, but it is not itself light or matter. The pressure that keeps a bicycle tire blown up is an interaction between the air and the tire. Pressure is not a form of matter in and of itself. It is as much a property of the tire as of the air.
What is matter?
Matter can be defined as anything that is affected by gravity, i.e., that has weight or would have weight if it was near the Earth or another star or planet massive enough to produce measurable gravity.

Some things that appear weightless actually do have weight, and so qualify as matter. Air has weight, and is thus a form of matter even though a cubic inch of air weighs less than a grain of sand. A helium balloon has weight, but is kept from falling by the force of the surrounding more dense air, which pushes up on it.
What is light?
Light can be defined as anything that can travel from one place to another through empty space and can influence matter, but has no weight.

For example, sunlight can influence your body by heating it or by damaging your DNA and giving you skin cancer. The physicist’s definition of light includes a variety of phenomena that are not visible to the eye, including radio waves, microwaves, x-rays, and gamma rays. These are the “colors” of light that do not happen to fall within the narrow violet-to-red range of the rainbow that we can see.
What is an electromagnetic wave?
Electromagnetic waves are waves in which there are both electric and magnetic fields.

Light is an electromagnetic wave

Once created, the wave spreads out through space without any need for charges or currents along the way to keep it going. As the electric field oscillates back and forth, it induces the magnetic field, and the oscillating magnetic field in turn creates the electric field. The whole wave pattern propagates through empty space at the speed of light.
What is a frequency?
Frequency is the number of cycles of a repeating event per unit time.

Frequency is an important parameter used to specify the rate of oscillatory and vibratory phenomena, such as mechanical vibrations, audio (sound) signals, radio waves and light. 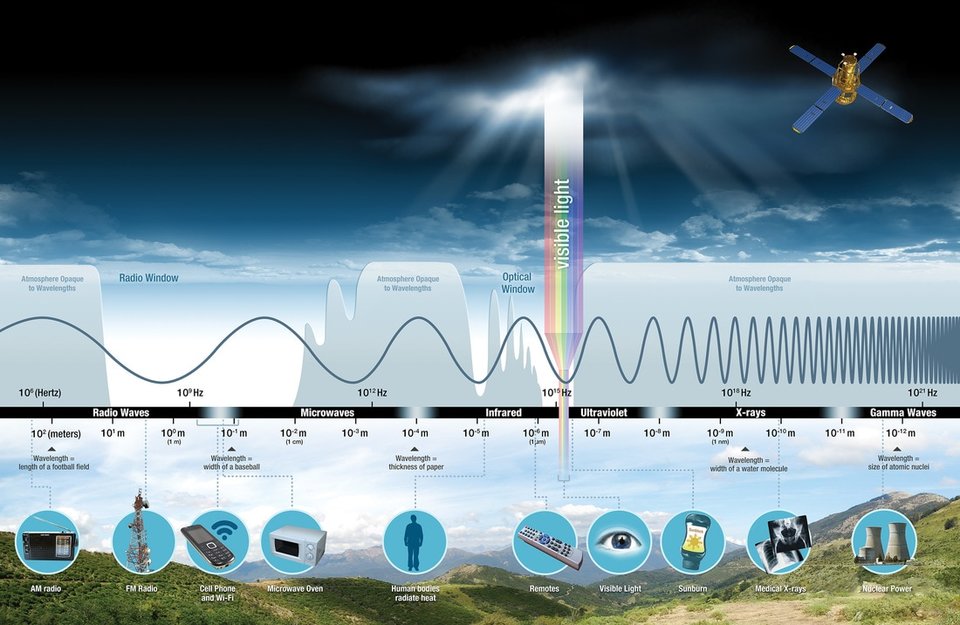 The electromagnetic spectrum. Image by NASA