Whether we are feeling sad, scared, or euphoric, an emotion has two major components: a physical sensation, such as a rapid heartbeat, and a conscious, subjective experience or feeling, such as feeling scared. Emotions typically demonstrate valence, or a generally positive or negative quality.

The Evolution of Emotion

Charles Darwin carefully studied facial expressions produced by humans and other primates and concluded that emotional expression must have evolved. Because evolution implies beneficial change, it may be of concern to ask how emotions improved our ancestors' chances of survival. One possible advantage of emotions is their contribution to general arousal. When the brain perceives a situation requiring action, emotions provide the arousal needed to trigger a response. Arousal interacts with the complexity of a task to predict performance. For simple tasks, such as outrunning a predator, greater arousal tends to lead to superior performance. For more complex tasks, however, we see deficits in performance when arousal levels are too high. This phenomena may be observed when performing poorly on a exam due to stress or anxiousness.

In addition to contributing to general arousal, emotions manage our approach and withdrawal behaviors relative to particular environmental stimuli. The positive emotions associated with eating contribute to seeking food when we are hungry, and the negative emotions elicited by observing a large snake lead to avoidance, providing advantages for survival.

We often experience emotions directly in the body. Numerous studies have established that emotion systems prepare us to meet challenges encountered in the environment by adjusting the activation of the cardiovascular, skeletomuscular, neuroendocrine, and autonomic nervous system (ANS). Models of emotional processing assume that subjective emotional feelings are triggered by the perception of emotion-related bodily states that reflect changes in the skeletomuscular, neuroendocrine, and autonomic nervous systems. These conscious feelings help the individuals to voluntarily fine-tune their behavior to better match the challenges of the environment. Although emotions are associated with a broad range of physiological changes, researchers have revealed maps of bodily sensations associated with different emotions using a unique computer-based, topographical self-report method. 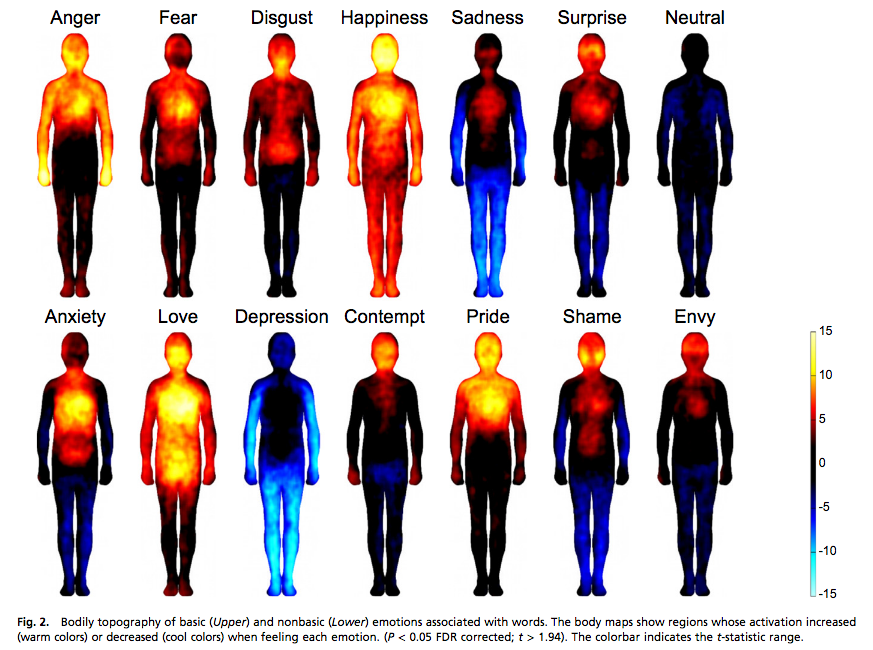 More than 700 participants were shown two silhouettes of bodies alongside emotional words, stories, movies, or facial expressions, and they were asked to color the bodily regions whose activity they felt to be increased or
decreased during viewing of each stimulus. Different emotions were associated with statistically clearly separable bodily sensation maps. These results suggest that consciously felt emotions are associated with culturally universal, topographically distinct bodily sensations that may support the categorical experience of different emotions. Emotional feelings are associated with discrete, yet partially overlapping maps of bodily sensations, which could be at the core of the emotional experience. These results thus support models assuming that somatosensation and embodiment play critical roles in emotional processing. Unraveling the subjective bodily sensations associated with human emotions may help us to better understand mood disorders such as depression and anxiety, which are accompanied by altered emotional processing, ANS activity, and somatosensation.