Fats are More than Just an Energy Source

Required for hundreds, if not thousands of physiological functions, lipids are crucial for the structure of cell membranes, protecting vital organs and are required for the nervous and reproductive systems, among other functions. Many people believe that fatty foods are unhealthy, which results in tendencies to shop for "fat-free" foods, in an attempt to avoid fats altogether. It is important to acknowledge that, although diets high in bad fat can lead to obesity and heart disease, getting an adequate amount of healthy  fats is just as essential for optimal health as avoiding excess fat and the bad  types of fat.

Considered as a macronutrient, lipids are very efficient at providing large amounts of energy. Lipids come in many varieties, and it is important to understand how they differ chemically and physiologically. A wide variety of plant and animal-based foods contain oils and fats. Distinguishing the difference between healthy fats and unhealthy fats is very important in acquiring and maintaining optimal health.

Fats and Oils are Types of Lipids

Fatty Acids are the Most Common Type of Lipid

Fatty acids are a type of lipid consisting of a chain of carbons with a methyl (-CH3) group, called the omega end, and a carboxylic acid group (-COOH) on the other, called the alpha end. A chain of carbon atoms forms the backbone of each fatty acid. Most fatty acids are not in "free" (unbound) state but rather components of larger molecules, such as triglycerides and phospholipids. There are various unique fatty acids, differing in the number of carbon atoms, types and locations of the chemical bonds that hold the carbon atoms together. Each of these differences influences the physical properties of fatty acids and their roles played in the body.
Fatty acids also differ in the types of chemical bonds between their carbon atoms - either single bonds or double bonds. If the fatty acid contains:
one or more double bonds, it is a unsaturated fatty acid
Similar to chain length, the type of bond can influence the nature of the fatty acid. Saturated fatty acids, due to their rigidity, are highly organized and dense, making them a solid at room temperature (such as coconut oil). In contrast, unsaturated fatty acids can bend or kink, due to the double bond, causing them to become disorganized, preventing them to be densely packed, making them a liquid at room temperature.

While some naturally occurring foods, such as dairy and beef products, may contain trans fats, most trans fats are produced commercially in a process called partial hydrogenation. Partial hydrogenation converts most of the double bonds into single bonds, causing oils to become fats. This process is done by adding hydrogen atoms, and consequently results in converting some of the cis double bonds into trans double bonds. Partial hydrogenation is often used in food manufacturing to create a more "desirable" food texture and to reduce spoilage. Trans fats are most often found in crackers, pastries, bakery products, shortening, margarine and some nut butters. It is well established that individuals should limit the intake of trans fatty acids, due to an increased risk of cardiovascular disease (McGuire & Beerman, 2012).

Of all the fatty acids found in foods, only two are considered essential nutrients: linoleic acid and linolenic acid. These polyunsaturated fatty acids are essential because the body cannot create double bonds in the omega-3 and omega-6 positions of the backbone. The omegas are also used in the body to make important regulatory substances called thromboxanes, prostaglandins, leukotrienes, and eicosanoids (hormone-like compounds). These are involved in blood clotting (thromboxanes), inflammation (prostaglandins and leukotrienes), womb activity, digestive function (both movement and secretion of enzymes), and regulation of blood pressure (prostaglandins).

The omega-6 pathway begins with linoleic acid, a substance that is found in many seed and vegetable oils (sunflowers, safflower, walnut, corn, and soy) as well as nuts, organ meats, and human milk. Some linoleic acid is made into arachidonic acid (also found in quantities in meat, liver, kidney, egg yolk, and prawns), which is used to make those eicosanoids that have an inflammatory effect on the body, as well as being thrombotic (blood clotting) and increasing muscle spasm. Some omega-6 fatty acids go to make anti-inflammatory eicosanoids before the inflammatory arachidonic acid is created. One type of omega-6 that tends to end up as anti-inflammatory eicosanoids is GLA, found in evening primrose oil, blackcurrant seed oil, and starflower oil.

The omega-3 pathway revolves around linolenic acid (found in oily fish, as well as linseed, hempseed, pumpkin, and dark green leafy vegetables). Only the eicosanoids with anti-inflammatory, antithrombotic, and antispasmodic effects are made by the body from this pathway. Additionally, EPA near the end of this pathway inhibits the conversion of arachidonic acid to the inflammatory eicosanoids. Therefore, consuming large amounts of EPA not only provides the ingredients for anti-inflammatory eicosanoids, but also reduces the synthesis of pro-inflammatory molecules. EPA, one of the active ingredients in fish oil supplements, is also known to increase the flexibility of cell membranes, plays a crucial role in cognitive development, and exerts beneficial effects throughout the whole body.

As mentioned above, the essential fatty acids can be converted to eicosanoids, lipid-like substances vital for regulating the immune and cardiovascular systems, among other functions. The body produces both omega-3 and omega-6 eicosanoids, both which have opposing actions. Omega-6 eicosanoids have the tendency to produce inflammation and constrict the blood vessels, but can encourage anti-inflammatory effects in certain circumstances, whereas omega-3 eicosanoids exhibit anti-inflammatory effects and dilate blood vessels. Both of these eicosanoids are important for health, and must exist in balance with one another (McGuire & Beerman, 2012).
Learn more about inflammation

Many foods contain a mixture of fatty acids. However, some foods are better sources of a particular fatty acid. For example, nuts and seeds are generally rich sources of linoleic acid. Linolenic acid is found in some oils and nuts. Some foods are good sources of both essential fatty acids. In the American diet, omega-6 fatty acids are more available, and typically have a higher consumption rate, than omega-3 fatty acids. Therefore, it important to focus on consuming adequate amounts of omega-3 fatty acids such as EPA and DHA. Researchers have observed that higher intakes of omega-3 fatty acids are inversely related to cardiovascular disease and stroke, due to the potent anti-inflammatory effects of these compounds in the body. EPA and DHA are abundant in fatty fish, other seafood and flaxseed, and a smaller amount is found in eggs. Omega-6 fatty acids are found in oils (such as safflower, sunflower, canola, and soybean oil) contained in processed foods, as well as, meat, poultry and eggs (McGuire & Beerman, 2012). The shift to a diet high in omega-6 fatty acids creates low-grade, chronic inflammation in the body, which contributes the to development of various diseases, including obesity and osteoporosis (Ilich, Kelly, Kim & Spicer, 2014). 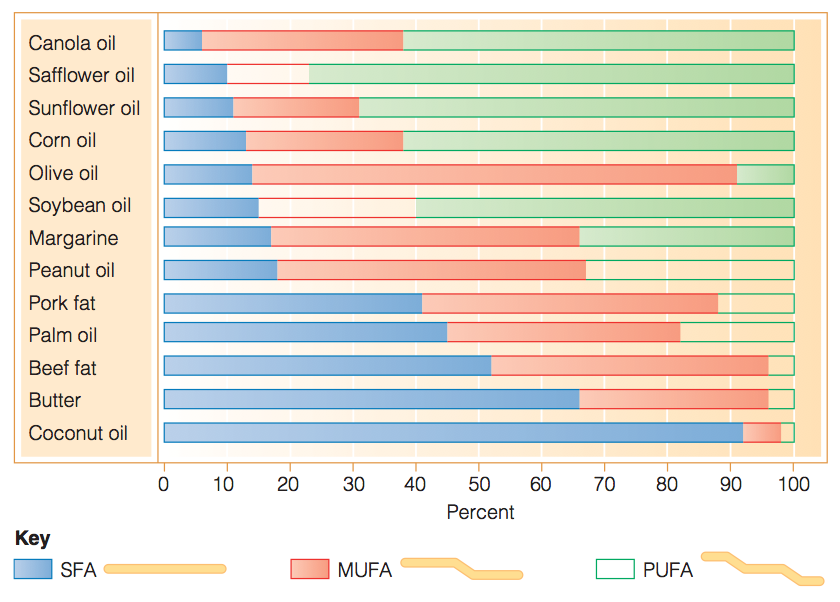 Phospholipids and sterols are essential components of cell membranes and are involved in the transportation of lipids into the blood stream. Since the body can synthesize that compounds, no dietary requirements exist for these classes of lipids. However, they are commonly found in food.

Phospholipids are similar to triglycerides in that they contain a glycerol molecule bonded to fatty acids. Although, instead of having three fatty acids, phospholipids have two fatty acids. Where the third fatty acid would be, a phosphate-contained polar group exists. Phospholipids contain both polar (hydrophilic, or water-soluble) and nonpolar (hydrophobic, or fat-soluble) regions. A molecule that is polar (such as water) has both positive and negative charges. Conversely, nonpolar molecules (such as triglyercides) have even charge distributions and do not dissolve well with polar compounds. This is the reason why oil and water do not mix. Since phospholipids have both polar and nonpolar regions, they are considered amphipathic compounds. The two fatty acids are hydrophobic and are therefore drawn to lipids, whereas the polar head group is hydrophilic and drawn to water. These opposing attractions allow phopholipids to act as major structural components of cell membranes and to play roles in digestion, absorption, and transport of lipids in the body. Cell membranes consist of two layers (a bilayer) of phospholipids with the hydrophilic polar head groups pointing to the extra- and intracellular spaces, both of which are predominantly water. The hydrophobic tails face toward the interior of the membrane, forming a water-free lipid-rich zone (McGuire & Beerman, 2012). 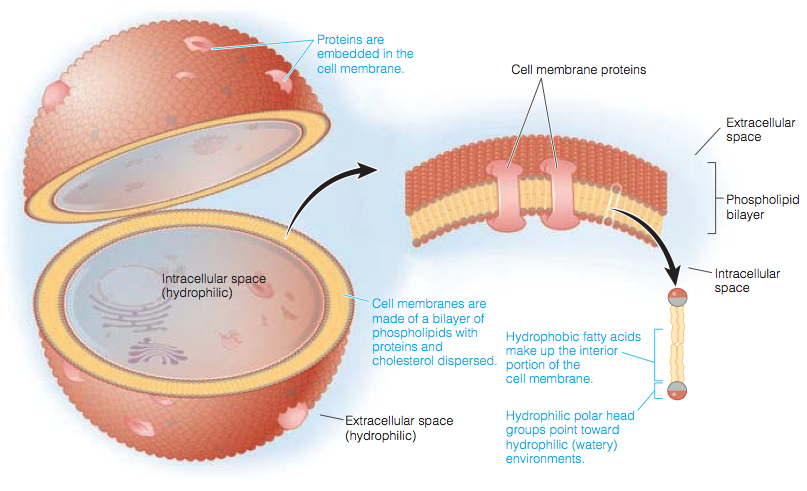 A Cell Membrane consists of a phospholipid bilayer, proteins, and cholesterol. Image from Nutritional Sciences
Sterols are structurally different from other lipids in that they consist of multi-ring structures. Sterols can either be free (not bonded to another molecule) or attached to a fatty acid. There are various types of sterols, but the most abundant is cholesterol. Contrary to popular belief, cholesterol has many essential roles in the body. For example, cholesterol is required to synthesize bile acids, phospholipids, and steroid hormones (McGuire & Beerman, 2012). To learn more information about cholesterol, click on the button below.
Cholesterol

The acceptable macronutrient distribution range recommends that adults consume 20 - 35 % of the energy from lipids. Based on a 2000 calorie diet, that is equivalent to 400 - 700 kcal, or 44 -78 grams, from lipids. Evidence suggests that trans fat consumption should be limited. The American Heart Association recommends that cholesterol intake should be limited to <300 milligrams per day (McGuire & Beerman, 2012). Monounsaturated fats, such as olive oil and avocado should be 10-15% of total calories, omega-6 fatty acids, such as corn oil and safflower oil should be limited, about 5% of total intake. Omega-3 fatty acids, such as from fatty fish, flaxseed and walnuts should be 2-3% of the diet. Processed vegetable oils should be avoided entirely. Saturated fats should be 7- 10% of total calories and should be sourced from whole foods. When using animal sources, select grass-fed and free-range when possible (Antonio et al., 2014).