Americans have been led to believe
- by their doctors, by advertisers, and by the pharmaceutical industry - that there is a pill to cure just about anything.

Skeptical of claim that doctors are paid by Big Pharma? Open Payments Data is a government website that allows you to view the financial relationship between doctors and the pharmaceutical industry.

The fact of matter is, profit has driven the pharmaceutical and medical industry into the status of our current system. Rather than doctors addressing the root of the problem, treating the symptoms generates more profit. Top-selling drugs do no exist to prevent disease or ailments. The vast majority of prescription drugs are sold to reduce isolated symptoms, which stem from an imbalance in the body. With more symptoms, the more drugs one needs. These companies can only make money only if you are in a constant state of sickness. Think about it - if your healthy and don't come back, or if you die, the pharmaceutical companies do not generate profit. 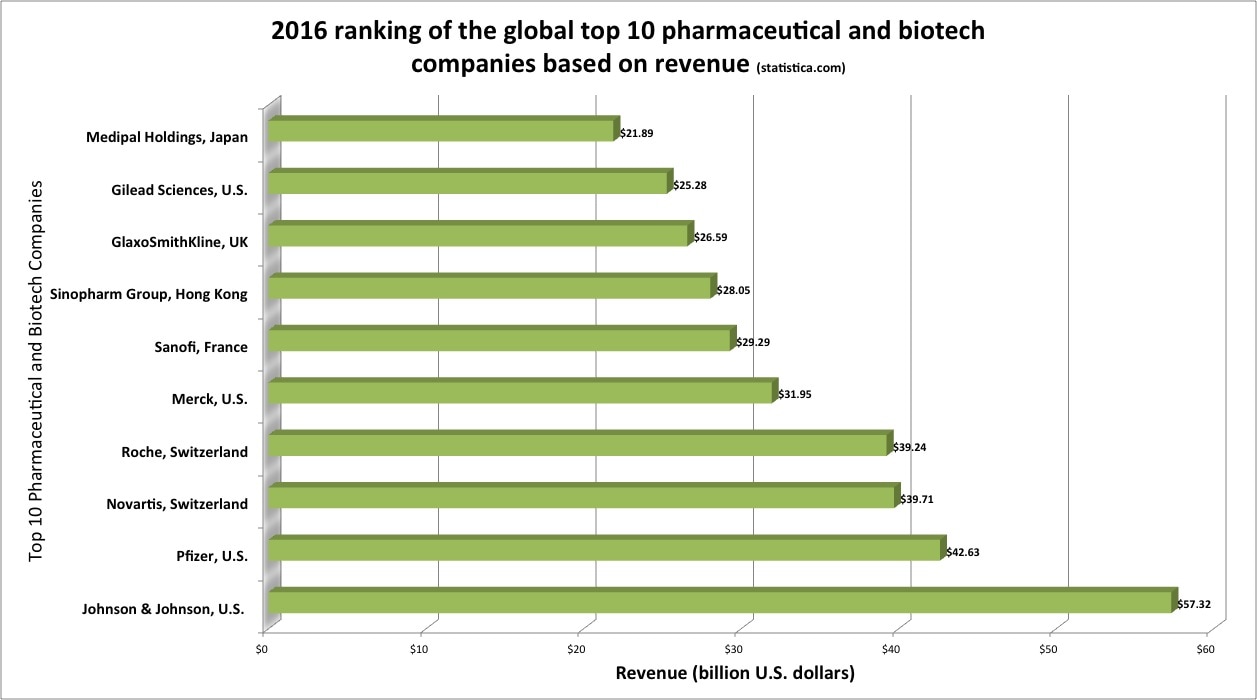 Image by Joe Pineda. The values are based on the 2016 Financial Times Global 500 list.

The True Cost of Prescription Drugs

Research published to the journal of Psychological Science in 2015, stated that acetaminophen, the active ingredient in Tylenol, which is labeled as a pain reliever, may be better labeled as an all-purpose emotion reliever. The study concluded suggesting that acetaminophen blunts both positive and negative emotional processing, compared to a placebo (Durso, 2015). Acetaminophen has also been observed to reduce the "pain" of social rejection. Researchers speculate that the drug may reduce behavioral and neural responses to social rejection. This phenomena suggests that acetaminophen demonstrates a substantial overlap between physical and social pain (DeWall et al., 2010).

Researchers examined the effects of over-the-counter (OTC) pain relievers, ibuprofen and acetaminophen, on muscle protein synthesis and soreness after high-intensity resistance training. Participants were either given 1,200 mg/day of ibuprofen, 4,000 mg/day of acetaminophen, or a placebo, after 10–14 sets of 10 eccentric repetitions. The results suggest that both ibuprofen and acetaminophen suppress the protein synthesis response in skeletal muscle after eccentric resistance exercise (Trappe et al., 2001).

Direct-to-consumer (DTC) advertising is commonly seen/heard on television, magazines, newspapers, radio and the internet. They are the ads that seem to convince people if a certain pill is right for you.

The FDA conducted consumer surveys of U.S. adults, asking them questions measuring the influence of DTC advertising on their attitudes toward prescription drugs, health-related behavior, and on aspects of the doctor-patient relationship. Among patients who had seen a doctor, about 40-50% stated that a prescription drug advertisement had caused them to seek more information about the drug. 42% of those surveyed agreed that DTC ads make it seem that the drug will work for everyone (Woodcock, 2014).

The History of Western (Rockefeller) Medicine

There is no doubt that many medications may offer genuine therapeutic benefits. The growth of the pharmaceutical industry occurred through promoting innovative medicines for major diseases. However, over time, in order to continue growing, Big Pharma stepped down the path that is focused more on patents, rather than patients. Numerous patented drugs are created to mask every symptom imaginable. This leads to a surplus of newly developed drugs into the market, with 85 to 89 percent left with little or no clinical advantage (Light, D.W., 2014).

A 2013 Harvard study, Institutional Corruption of Pharmaceuticals and the Myth of Safe and Effective Drugs, warned that the priorities of pharmaceutical companies have taken priority over patients, and that unless this corruption  reversed, the situation will continue to deteriorate (Light, Lexchin, & Darrow, 2013).