Cognitive Dissonance: a mental conflict that occurs when beliefs are contradicted by new information

When a person hears information that contradicts their worldview, or experiences two thoughts that are inconsistent with one another, the resulting insecurity is called "cognitive dissonance". This conflict activates areas of the brain involved in personal identity and emotional response to threats. The resulting alarm becomes activated when a person feels threatened on a deeply personal and emotional level causing them to disregard any rational evidence that contradicts what they previously regarded as "truth".

Humans are sensitive to inconsistencies between actions and beliefs. As humans, we all recognize, at some level, when we are acting in a way that is inconsistent with our beliefs/attitudes/opinions. In effect, there is a built in alarm that goes off when we notice such an inconsistency, whether we like it or not. For example, if you have a belief that it is wrong to cheat, yet you find yourself cheating on a test, you will notice and be affected by this inconsistency.

Dissonance gets in the way of finding some sense of truth. If we want to understand the world, we want a clear and consistent picture of it, and when anything makes us experience dissonance, we will become motivated to restore consonance. 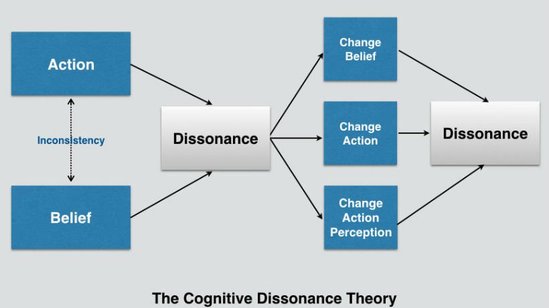 "The Best Way Out Is Through"
Robert Frost