Sacred geometry: universal patterns used in the design of everything in existence

Sacred geometry, sometimes called "the language of light", is the morphogenic structure behind reality itself, underlying even mathematics. Most physicists and mathematicians think that numbers are the prime language of reality, but it actually shape that generates all the laws of physics. In fact, sacred geometry is a language, a language through which everything was created. There is nothing on any level of existence whatsoever that doesn;t have geometry behind it.

Most often seen in nature, architecture and art all over the world, sacred geometry consists of the mathematical ratios and proportion that are also found in light, harmonics, and the origin and development of the universe. Worldwide, sacred geometry is considered to be the foundation to the creation of many sacred structures including temples, mosques, megaliths, monuments and churches using divine proportions.

Sacred geometry may be recognized as a complex system of symbols and structures involving space, time and matter. According to this view the basic patterns of existence are perceived as sacred. By acknowledging and studying the nature of these patterns, forms and relationships and their connections, contemplation and insight may be gained into the mysteries and laws of the Universe.

Conception beings when the sperm reaches the ovum. This process requires hundreds of sperm to accomplish. From these hundreds of sperm, roughly twelve work together as a unit. Through their total unified action, only one of the sperm gets to enter the ovum. The sperm tail then breaks off and the head of the sperm forms a sphere exactly the same size as the female pronucleus. These then merge and form a vesica piscis.

The sperm and ovum then pass right through each other to form the zygote. The zygote now contains forty-four plus two chromosomes. Next mitosis occurs, and the polar bodies migrate to opposite ends of the cell and form a north and south pole. A tube then splits the chromosomes, with half going to one side of the tube and half to the other side.

A zygote then splits into four cells and forms a tetrahedron inside a sphere. The next division yields eight cells and star tetrahedron, which is also a cube. At this point it is the egg of life. The eight cells appear to be identical in all ways. The location of these eight cells is in the geometrical center of the body, at the perineum. All of the energy fields around a human body are centered on these eight cells. Humans grow radially out from this form. 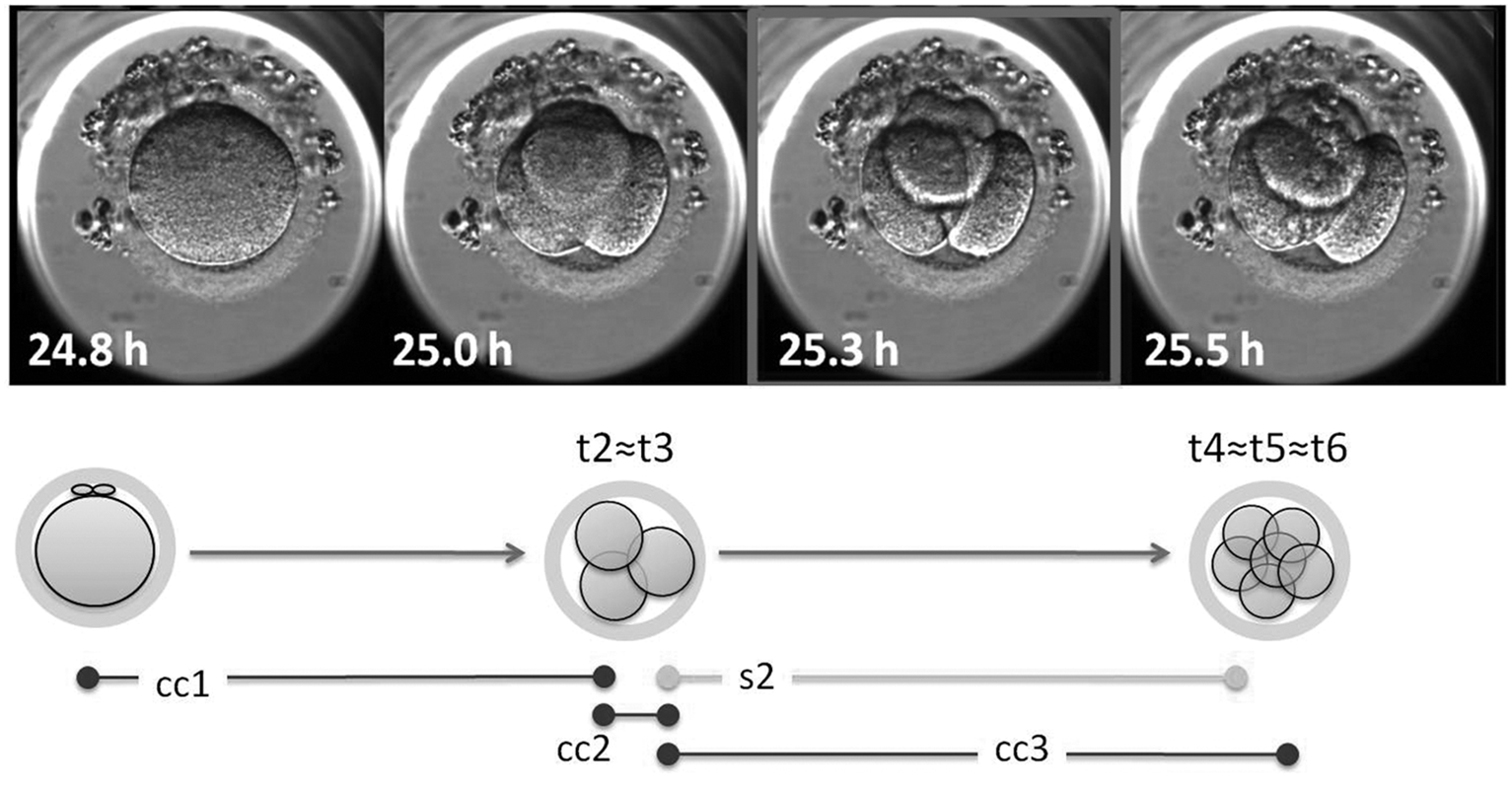 The Seed of Life - Genesis Pattern

This complete, six-pettled flower is known as the Seed of Life, and creates a three-dimensional cube if the centers are connected. This shape is the morphogenic structure that creates the human body, also known as the Egg of Life.

The Flower of Life

Of all of the sacred shapes, the flower of life is the penultimate. Everything ever created or in existence now was accomplished through this pattern. Contained within the flower of life is everything. There isn't anything in the universe and never will be that isn't manifested in this image - all languages, all laws of physics, all biological life forms - including all of us individually. 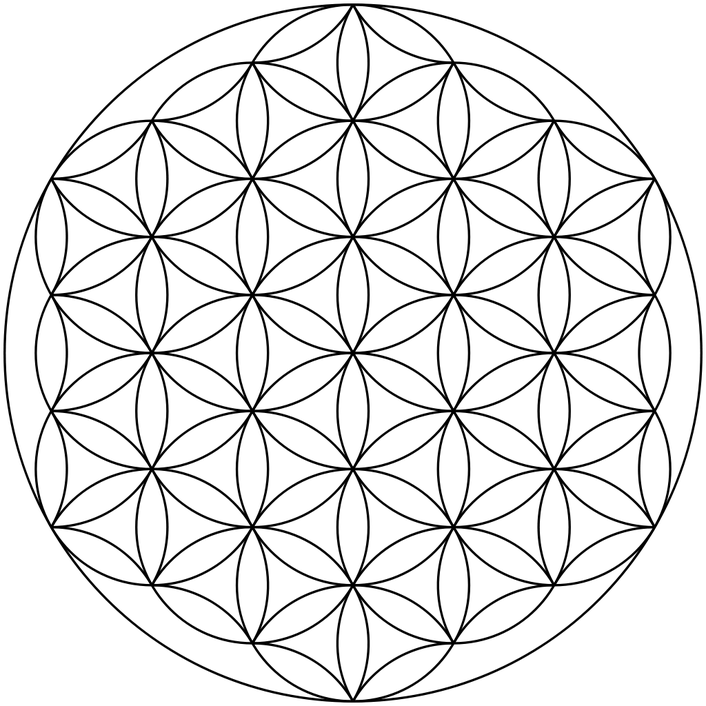 Flower of life. Image by Life of Riley on Wikimedia Commons
The image is called the "flower of life" because it came from the pattern of a tree. Think of a fruit tree: as it grows, it flowers and then fruits. The fruits fall, and in each one are multiple seeds, and each seed has in it the image of the tree.

The complete flower of life also contains the three-dimensional Metatron's Cube. Metatrons cube is the name for a geometric figure that is made from connecting lines from the center of each 13 circles to the other 12 circles. These circles come from the Fruit of Life, which comes from an extended version of the Flower of Life. Metatron's cube contains within it the platonic solids. 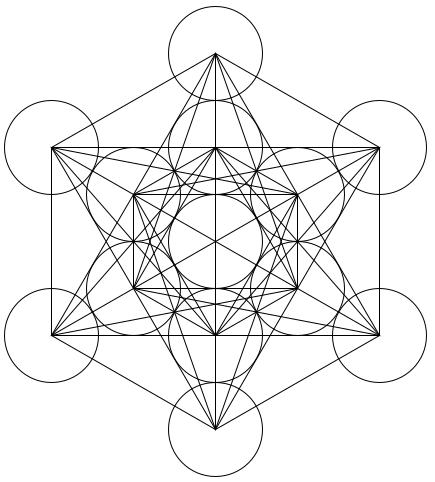 The Platonic solids get their name from the Greek philosopher, Plato, who wrote about them. They were, in fact, known long before Plato by many different cultures. Plato wrote about them in his book Timaeus. This work was a mixture of philosophy, science, mathematics, and theology, which is not surprising since, at that time, the four fields were all considered part of the same whole. In Timaeus, Plato came up with an early version of atomic chemistry where all of matter was made up of combinations of these five shapes at a microscopic scale, and where it was these shapes that gave matter its properties ﻿﻿﻿(Radin, 2008)﻿﻿﻿﻿﻿.

In three-dimensional space, a Platonic solid is a regular, convex polyhedron. It is constructed by congruent regular polygonal faces with the same number of faces meeting at each vertex. Five solids meet those criteria:

The platonic solids are the building blocks of life. Researchers have demonstrated that some problems in physics, chemistry and mathematics that lead naturally to a class of polyhedra which include the Platonic solids. Examples
include the study of electrons on a sphere, cages of carbon atoms, central configurations of gravitating point particles, rare gas microclusters, soliton models of nuclei, magnetic monopole scattering and geometrical problems concerning point particles (Atiyah and Sutcliffe, 2003).

The phi ratio is derived by beginning with a square. From the square, draw a line down its middle as shown in the diagram below. Then make a diagonal line (which is labelled as the radius) and with a compass rotate the diagonal line, then A/B = C/A, and the proportion comes out to 1.6180339.
The bone structure of organic life is based on the phi ratio. For example, in humans, the bones in the fingers all stand in phi ratios. The first bone in the finger is in phi ratio to the second, and the second to the third, etc. This is also true of the bones in the feet and legs.

All of the universal laws are contained within your own body's proportions. The image of the fields around your body is the same image that surrounds everything and through which everything was created.